If you want to stay on top of the Instagram game, posting aesthetic images of food just doesn’t cut it anymore. A consistent visual identity, strong brand voice, and a unique personality that’s both authentic and memorable are just some of the must-haves. Take a look at these 10 brands who’re getting it right on all accounts.

If there’s one restaurant brand who hasn’t got a foot wrong on social media it’s Taco Bell. The fast-food chain has a clearly defined target demographic, which could be summed up as ‘the young and the restless’, and have shaped their brand image around this. What’s so refreshing about all the Instagram posts from Taco Bell is that nothing looks forced but feels totally authentic and highly engaging. How do they manage this? According to Nick Tran, the former social media lead, the brand hires “millennial-minded individuals because they live and breathe social media”. Funky graphics, witty captions, and lots of emojis—the perfect recipe for Insta success. 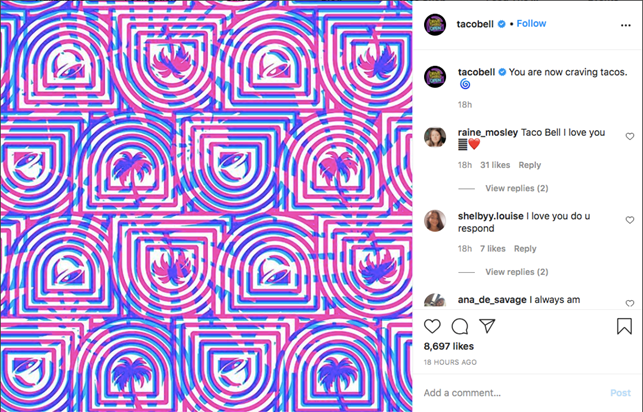 During Pride Month in June this year, Starbucks did a series of Instagram posts focusing on LGBTQ+ employees. Similar stories were posted on Black History Month, Asian American and Pacific Islander Heritage Month, International Women’s Day etc. This has been a winning social media strategy for Starbucks, not only because they’re celebrating their workforce but also the diversity within it. So besides the attractive images of their products and appealing graphics, such posts with heartwarming human elements make Starbucks one of the most followed restaurant accounts with over 18 million followers. 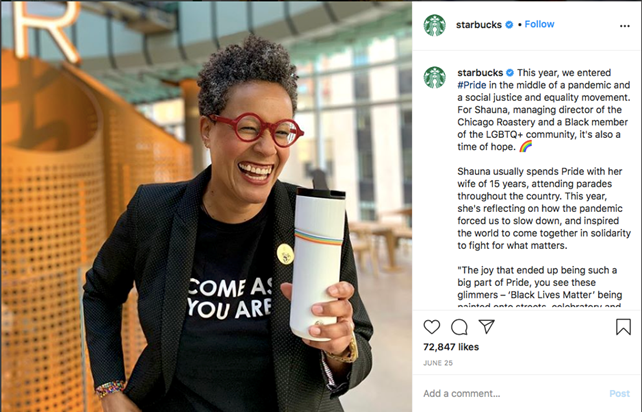 If we had to sum up Chipotle’s Instagram strategy in one word it would be “hilarious”. And a lot of this humor comes from the social media team’s topnotch meme game. Take this for instance: A picture of a packed burrito on a sofa with the caption, “When the delivery arrives and you realize the burrito has moved more than you have today.” Chiptole’s one million followers are treated to such delightful posts regularly and this has lent the brand a unique personality on Instagram. If there’s one thing Chipotle has taught us it’s not to be afraid of engaging in some fun and banter. 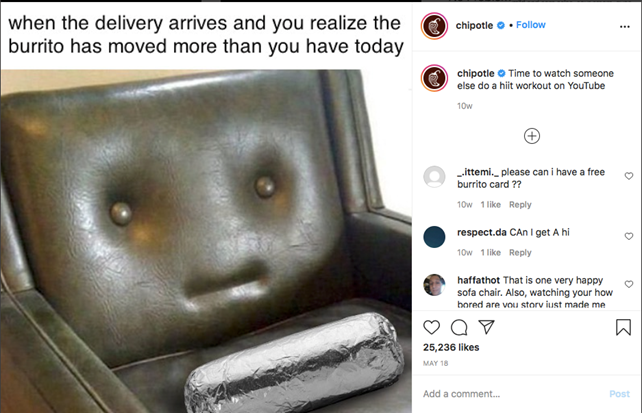 Another restaurant known and loved for its sparkling wit on social media is Wendy’s. The brand also doesn’t shy away from quick-fire repartees with their followers from time to time, making their Instagram not only engaging but absolutely entertaining. Kurt Kane, Wendy’s executive vice president and chief concept and marketing officer once called the brand’s voice “sassy” and no one could’ve offered a better description. By speaking the language of their primary target audience—young millennials, Wendy’s has managed to become quite the social media sensation. Comments from followers such as, “Wendy's when r u gonna do the roast thing?” prove how customers can’t seem to get enough of the brand. 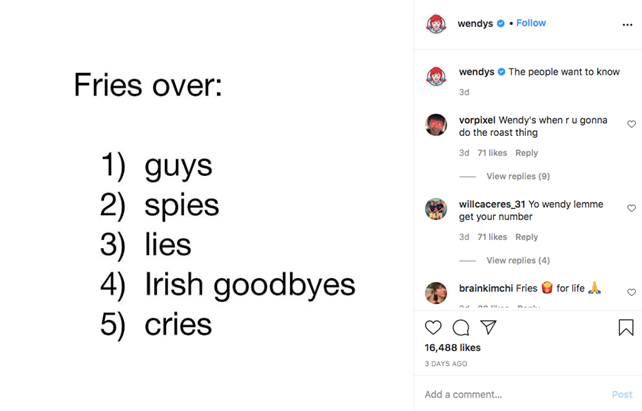 In 2018, Dunkin’ rebranded itself by dropping ‘Donuts’ from its name. According to the brand, this showed the breadth of its product offerings but it was also clear that the rebranding was a carefully thought out strategy to make itself more appealing to the younger, digital-first generation. The famous pink and orange visual identity pops out from Dunkin’s Instagram page, making it instantly identifiable. This is a great way to assert your brand identity and be memorable in customers’ minds. Dunkin’ has almost two million followers who drool over pictures of delicious-looking donuts and refreshers. 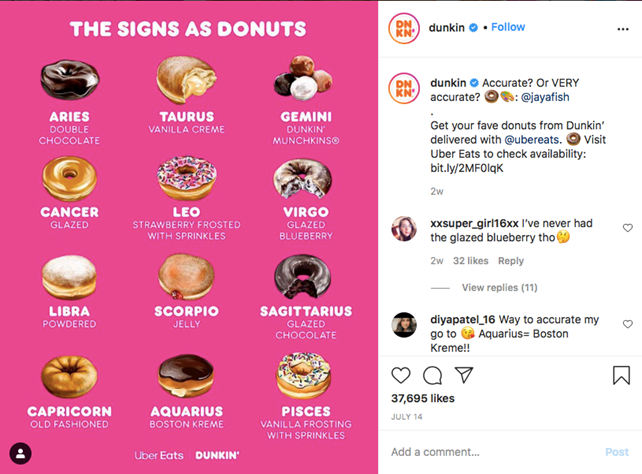 Helmed by chef Edouardo Jordan, June Baby is a restaurant in Seattle that celebrates Black Southern Food. No, they do not have a million followers like many of the fast-casual chains, but June Baby’s Instagram account is one of the best there is. The Instagram page has loads of amazing images of ‘soul-food’, which according to the brand’s website is not only a type of cuisine but also “a period of time of oppression and overcoming hardships”. The page also has wonderful photographs celebrating black history and paying homage to black personalities who made a mark in their respective professions, especially black women chefs. 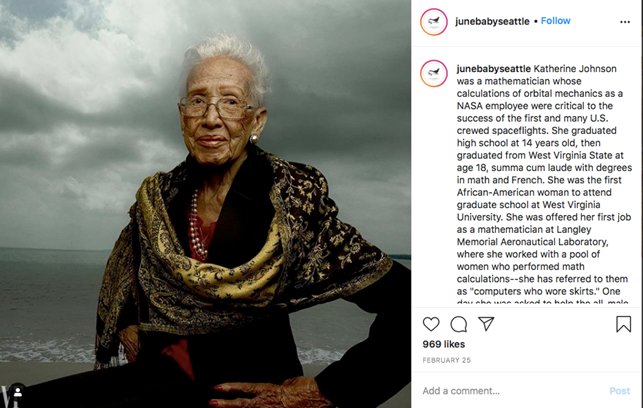 Eat By Chloe is a 100% plant-based fast-casual chain, with locations in the US, Canada and Europe. Speaking to the New York Times, chef-founder Chloe Coscarelli said about the brand, “We didn’t want it to scream ‘vegan,’ we wanted it to scream food and fun and delicious” and this is exactly what their Instagram strategy has also been. Taking on a retro visual identity, by Chloe’s Insta page looks like a fun girls’ night out in the 70s. Vegan food is often deemed as boring by many, but the brand’s Instagram account takes this notion and tosses it right out the door. The food looks absolutely delicious, but what’s more, it makes being a vegan the coolest thing in the world. 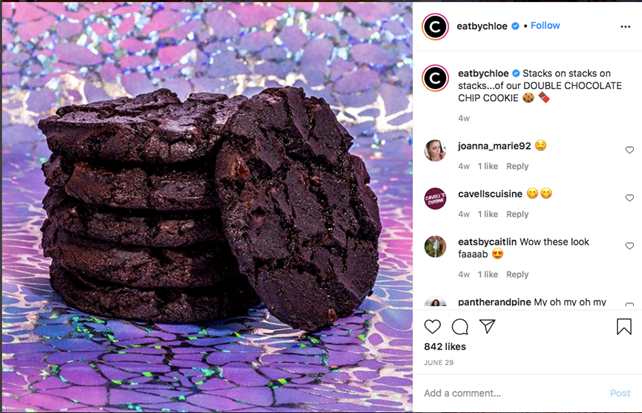 Instagram is a distinctly visual medium and Sweatshop NYC is a restaurant that has used this to its strengths. The photos on its Instagram page are all stunning and are mostly about their food and drinks and the restaurant interiors. The one unifying element in all of these images is the color black—whether it’s a stark black wall with “Don’t look for love, look for coffee” written on it or a simple black coffee mug on a table, Sweatshop’s visual identity is always on point. Minimal and very hipster, the brand is never short on the cool factor. 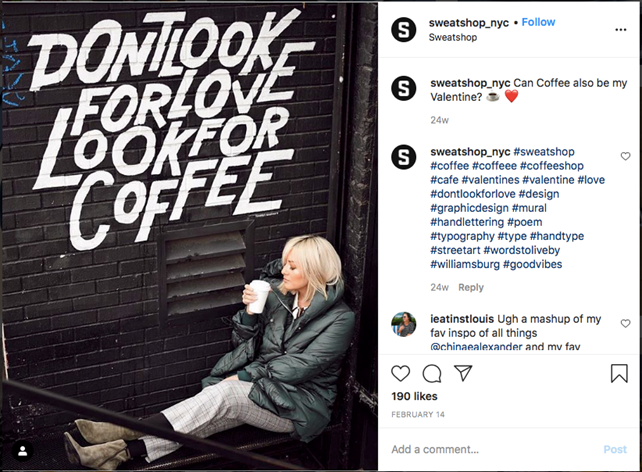 Atelier Crenn opened in 2011, and within two years’ time, Dominique Crenn earned two Michelin stars becoming the first female chef in the United States to do so. Located in Cow Hollow, San Francisco, Atelier Crenn is also one of the World’s 50 Best Restaurants. And yet, its Instagram page looks so approachable having done away with the superficial air that most luxury restaurants tend to do. From pictures of fresh produce at the restaurant’s Bleu Belle Farm to a goofy picture of Dominique with Lady Gaga, Atelier Crenn’s Instagram is totally unique and refreshing. 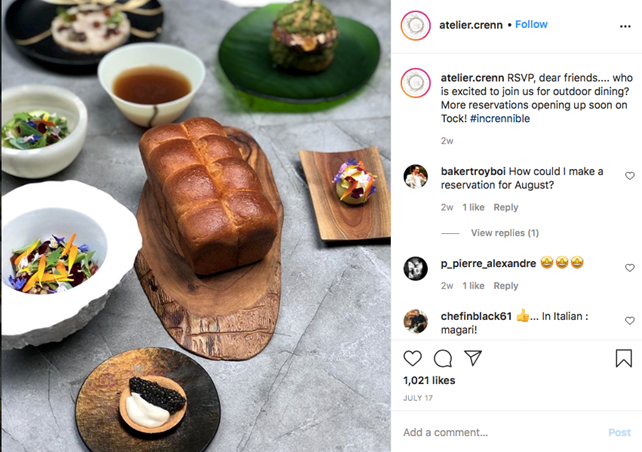 Howlin’ Rays claims to serve one of the best hot chicken in Nashville. One look at its Instagram page and you’ll have no doubts about it. So drool-worthy are the images that it’ll be impossible not to order some burning hot chicken right away! But Howlin’ Ray’s Instagram does more than making our mouths water incessantly. They also post pictures of their employees, or the Howlin’ crew as they like to call themselves, having fun at work as one big family. They’ve built a very recognizable brand identity built around their two biggest assets, food, and staff. 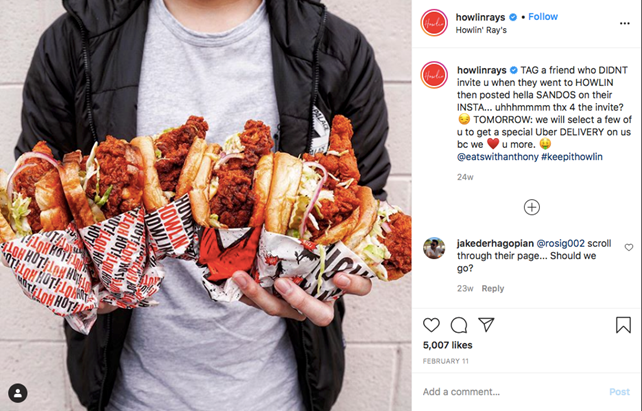 Do you think we’ve missed out on any other amazing Instagram profiles? Let us know in the comments below.

3.No commission, one monthly flat rate

Popular Posts
Start Your 30 Days Free Trial, No credit card required
Get Started Today
This website uses cookies to ensure you get the best experience on our website.